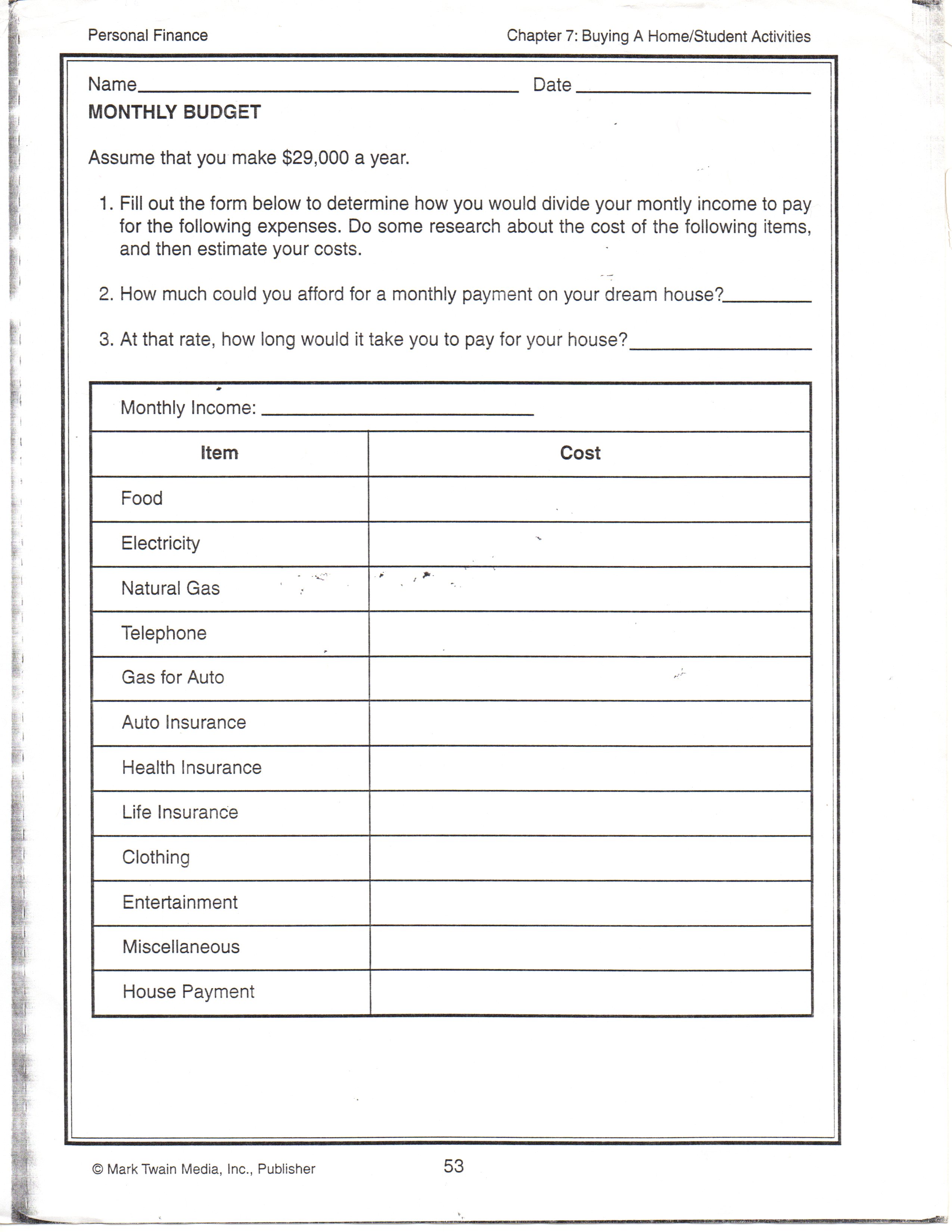 I mentioned, in a prior blog, the arrogance of bookkeepers who feel superior to their clients. I find it humorous that these bookkeepers, who are making far less money than their clients, consider those clients low class because of the clients’ inability to budget. “Why does this bozo keep bouncing checks and is always unable to pay the bills? It’s like pigs at the feeding trough – $15,000 comes in and it is spent on food and gadgets before the end of the day, before I can even pay a single bill. I could survive on $15,000 for a whole year, this jerk can’t survive on it for a day.”

Budgeting is native to a bookkeeper, but don’t expect a bookkeeper to create a budget report. Do you see the budget exercise at the top of this page? (From workbook titled “Personal Finance” by Karl S.Biedenweg – Mark Twain Media – 1999). It is targeted for 5th to 8th graders. It is probably the reason nobody makes a budget. It is painful and overwhelming. I know of no bookkeeper who would want to do that exercise. Why? It is too ambiguous. To a 5th grader, it is also pointless. In my private opinion, it also doesn’t have the essential element of budgeting: ruthlessness.

Let me tell you how a bookkeeper learns to budget. A bookkeeper records bank deposits, bank withdrawals, bills and bill payments. A bookkeeper sees how much money comes in and a bookkeeper doesn’t like negative numbers. It is as simple as that.

Let’s go over these points.

Point number one. A bookkeeper records bank transactions. Why record bank transactions when the bank does that for you and provides you full reports? The reason a bookkeeper records bank transactions is because the bank doesn’t know about outstanding items that have been initiated: checks that have been written but haven’t cleared, scheduled mortgage payments, credit card and utility auto-pays, etc. In addition, the bookkeeper doesn’t know about things the bank has initiated, or unexpected parties have initiated – bank fees, ex-wives or hackers getting into the account un-authorized. By comparing their own records to the bank’s records they can isolate the items they disagree with.

Point number two. A bookkeeper records bills. Why record bills? Because vendors get mad. And when vendors get mad, they resort to things like charging interest, cutting off service, reporting to a credit bureau, breaking a kneecap. All things that make it difficult to operate. Also, bills give a sobering picture how encumbered the money in the bank is.

Point number four. A bookkeeper doesn’t like negative numbers. This is the secret to their superiority. You see, the less money that comes in, the more closely a bookkeeper has to watch the bank balance, the more micro-managing a bookkeeper has to do. Now, a budget assumes a goal. But a bookkeeper’s goal is simply to keep the numbers positive. The client’s goal may be to reward themself, impress their neighbor, see the world, be more comfortable, who knows. A bookkeeper’s goal is much more simple. Just keep the numbers positive.

When I mentioned “ruthlessness” as an essential ingredient of budgeting, I simply mean having passion about one’s goal. That silly 5th grade exercise at the top of the page? Makes no sense. Why is the goal to buy a dream house when currently there are already house payments on the budget? Does this imply there is currently a house already owned? Then why not sell the house and use the cash for a down payment to buy the dream house? Or is the mortgage upside-down? Or if there is no house currently, is this an exercise to see if house payments are affordable? Compared with what? The current rent payments? Living with mom? And how realistic of a passion is this to this 5th grader? That’s what I mean by ruthlessness – just passion.

There are various ways to obtain a goal, including going into debt, including being generous, including having children, and including intangibles. These are strategies way beyond the province of a bookkeeper. Such strategies are created by business tycoons, saints, leaders, and visionaries. Any method to get to a goal, in my mind, is a valid budget. I have witnessed budget approaches of all types, and they are all individually tailored for the risk aversion and risk appetite of their creator.

Bookkeepers have a passion for keeping numbers positive. It is not the end-all and be-all of the universe, but it is their point of pride. I would like bookkeepers to help others obtain positive numbers, yet realize there are many methods of obtaining positive numbers, not just the method that they themselves stumbled upon. And I would like anyone floundering with the problem of keeping their money in the black to at least learn how to (1) record bank transactions (2) record bills and payments (3) see how much money is coming in and (4) limit their spending accordingly. It is at least one way to budget, and it is the most basic to start with.

I would like to hear as many insights and opinions as possible about budgeting.